What’s up guys, Ben Malol here. I want to shoot this really quick video testimonial for the god of Facebook ads, and it’s no other than Depesh. So in one sentence, I can say that Depesh’s advertising tactics gave us a ROAS of about 50,000%, 50,000x, and I’ll tell you why. We bought his cookbook, which is like $97?, $47?, I don’t remember, but somewhere around there, and thanks to that we were actually able to scale from our average days being at 10k, 12k to 40, 45, $50,000 days, really in four or five days, just from reading that cookbook which is a f*****g PDF, and just applying those strategies. Didn’t even get a course, literally just the cookbook. I’m sure his course is phenomenal by the way, I just haven’t went through it, I didn’t have the time but the cookbook in itself was just remarkable.

And that’s why I say a 50,000x for ROAS, because probably through his cookbook in the past month we’ve generated an additional, let’s say of usually with Jerry, 10k so with him it was 45k a day times like 30 is about $900,000. So a $97 investment to make $900,000, you can do the math. I don’t know if it’s 50,000x for us or 50,000%, but you get the point. Anyway, to make a long story short, I really didn’t think somebody can go so deep into not only giving you the strategies of what to do with your Facebook ads, and you do from a bidding to campaign strategy to prospecting to the whole ecosystem of it, but explaining why every single thing does what it does. You don’t really see that, I’ve never seen that before. And that’s what’s truly remarkable about Depesh’s strategies.

He does not only tell you, “Oh do this, click that”, but this bid, he tells you exactly why this is happening, which is insanely, insanely, insanely efficient, because the biggest problem here is that if you go with any other Facebook strategy or if in general you go on, you try to buy a course from obviously the millions of people that you’re probably aware of that sell courses, it’s usually do this, do that, but they don’t explain why. And I’ll tell you why it’s important to know exactly why you’re doing what you’re doing, is because when Facebook changes, and obviously everlasting changes every f*****g month, you want to be prepared. And how are you prepared? By knowing why the algorithm does what it does, why the campaign does what it does, how the ads of algorithm works, how bidding works.

Now, even if you’re a beginner, even if you’re an advanced marketer, well specifically for a beginner, then this is like for beginners and advanced marketers, but if you’re a beginner it’s so easy to understand where you’ll look at it and you’ll have a learning curve, I’m not going to lie, but you’ll be able to implement it immediately. Now I’m an advanced marketer, so obviously it was much faster for me, but seeing that he explains why everything works the way it does is very easy to understand his way to explain something that is so complicated as the Facebook algorithm. And I’ve been doing Facebook advertising for probably five years and I still didn’t know all of the things that he was showing there. But yeah, again, to make a long story short, we were able to go from $10,000 days to $40,000 days, $45,000 days while maintaining the same ROAS, which is truly remarkable. So again, I can’t believe he is selling a cookbook for only $7 of all of these strategies, that alone can be $10,000 and not even joking.

So yeah, Depesh, thanks again. And outside of that you’re an awesome guy, he’s an amazing guy and he is a good friend of mine, but this testimonial is not trying to not keep it at super bias, but he really is the type of person you want to learn from. He doesn’t seem like he’s doing it for the money, he’s actually doing it because he really cares and his work speaks for itself. He could have easily charged over $1,000 for this cookbook. He could easily charge a lot of money for the content that he produces, and it’s a 150 page document. And again, I keep blabbering about this cookbook, but I’m sure his courses are amazing as well. Anyway guys, if you’re considering anything from the Depesh, I vouch for him. And yeah, let’s see if we can take this to, if not a $100,000 a day and I’ll shoot another testimonial. Peace.

Go check it out here: www.CBOcookbook.com

Let’s get your ad account and business results up to Ben’s level too!

My mission is to bridge the gap between what high spending experts like me are doing right now and the knowledge and support gap between you and Facebook. 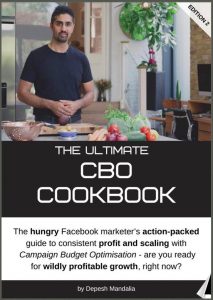