Should I drop spend?

What would you do? 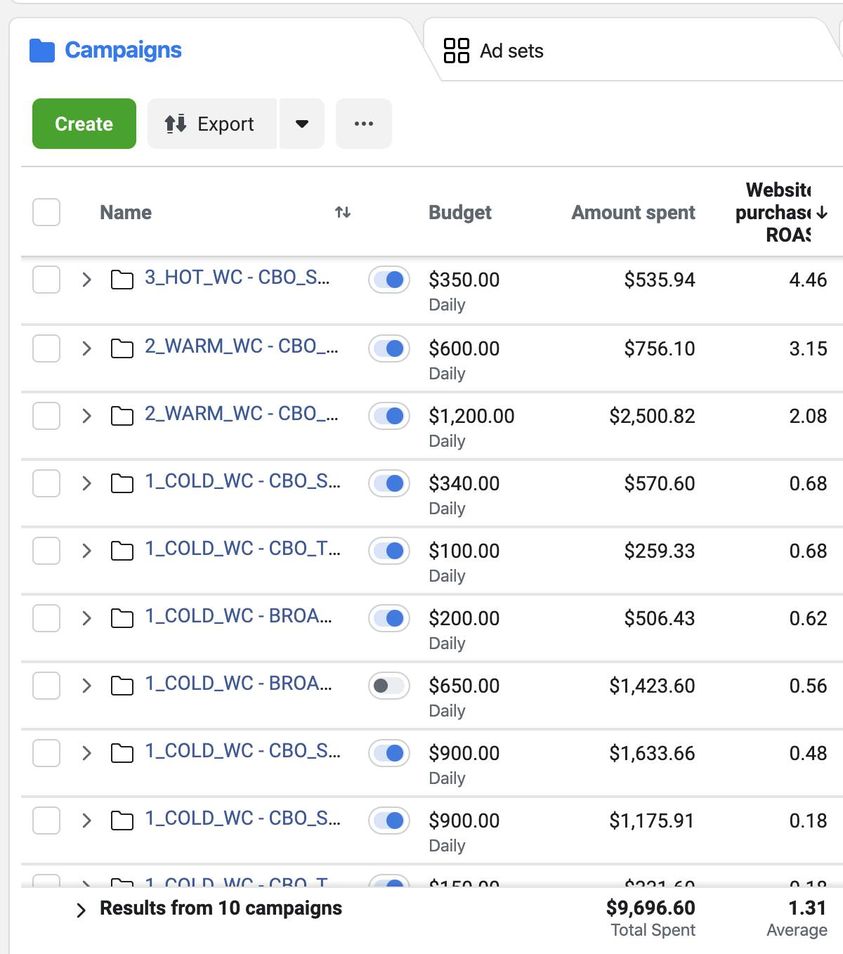 Just because your ad account is not ROAS positive, is your business ROI positive? What role does Facebook play? What % of spend is Facebook? What other TOF (Top of Funnel) channels are generating traffic?

I want to touch on an important point here…

High ROAS front-end businesses are NOT always the most successful.

Above’s a screengrab of a low ROAS front-end we’re running.

What would you do knowing 1.31x ROAS is not profitable?

There are many reasons for this.

We see this all the time.

We track the estimated ROAS, or eROAS.

Total Ad Spend (all channels) = spend across all your paid channels (for many small businesses this will be Facebook + Google).

Estimated because of loss of tracking and delayed attribution (ie. people not buying on day 1 and sales getting attributed to the previous day when they do).

We’ve used eROAS for a decade because of the age old problem of not being 100% sure of which ad platform(s) ultimately generated the sale.

In reality, when you have more than one touch point with the customer (for example, most people combine Facebook with either Google or Email) then it’s difficult to know the impact of every touchpoint.

For years the most intelligent data scientists have tried to ensure the best customer advertising journey is mapped, so it can be repeated.

For example, if someone sees a Facebook ad, clicks, lands on your site, signs up for email, opens and interacts with a few emails, then purchase via a Facebook retargeting ad… where do you assign the value?

Where do you scale up?

Not an easy challenge.

What is Marketing Efficiency Ratio (MER)?

Marketing Efficient Ratio is the same as eROAS and shortened down to MER. Choose whichever term sounds more comfortable to you whether it is eROAS or MER, the calculation is the same.

The ad account in the screen above spent just under $10K in the week whilst we scaled up ad spend.

A ROAS of 1.3 is NOT profitable, for this Ecom brand, alone.

But… overall we made $55K total revenue against the $10k spend over the day and a bit.

Where does the TOF traffic come from for this business?

If we paused Facebook, how much revenue would we lose?

That’s the killer question which drives the decision to use eROAS/MER over simply looking at ROAS alone.

The eROAS/MER halo is what we term as the actual impact from a specific channel.

Taking this example, let’s say we only credit 80% of revenue to Facebook (despite driving 90% of traffic – we can be a little generous if needed) to calculate eROAS, where a 20% ‘halo’ has been given to other marketing efforts.

In reality we’d combine Facebook and Google’s spend as the eROAS calculation but specifically here we’re focussing on Facebook here.

Based on the $55k generated, we take 80% of that from being generated by Facebook which is $44k – the rest we might say is contributed to other channels as the final close (to be fair).

We could turn that around and ask: what would happen if we didn’t spend on Facebook? You’d remove the $44k from the $55k and say the revenue could be $11k.

I ran an interesting test on this some years back with a brand that had this exact question but refused to believe in the eROAS halo – we paused ads for a week and saw this in the numbers – not only seeing overall revenue drop, but seeing up to 60% revenue drops in other channels too like paid search, email and affiliate marketing.

In simple terms, lots of investment in TOF paid ads via Facebook is paying dividends. And always does when done right.

Our goal here is to iron out the creases in not being able to track properly, end to end, exactly which ad channel is delivering results.

Calculation 2 – All revenue, all ad spend (including Google in this case)

In simple terms, lots of investment in TOF paid ads via Facebook is paying dividends. And always does when done right.

Our goal here is to iron out the creases in not being able to track properly, end to end, to understand which ad channel is delivering results.

If you’re in advertising then you should be aware of the impact iOS14 has had on reporting in particular.

This is a perfect use-case for using eROAS or MER.

If advertising wasn’t 100% accurate before iOS14 and Apple’s damage to ad platforms then now it is very much inaccurate.

Combined with a loss of conversion level reporting in Facebook ads manager and Facebook using modelled data in calculating results, this makes eROAS and MER more important than ever before.

In fact I will say that if you’re not measuring eROAS or MER right now you’re not advertising in the right way.

It’s essential to know whether your advertising is effective and in a time of less data and more questions, we have to find a common language, such as eROAS and MER.

Facebook can play an important part in the ‘awareness’ stage in the typical AIDA (awareness, interest, desire, action) model.

But many only give Facebook ads credit at the desire/action stage. Truth is for most small businesses running Facebook ads then, Facebook works across the full funnel.

This is not a solution for every business, but equally don’t just rely on Facebook ads reporting numbers.

Remember, a non-profitable ads manager ROAS may be hiding the real truth on your performance.

Not everything needs to be front-end positive ROAS – but eROAS and MER need to be part of your advertising vocabulary.

3 thoughts on “eROAS and MER – Why It’s Essential in Facebook Advertising (in fact, any advertising)”