I’m sharing the below based on recent frustrations with Facebook’s latest tech bug which caused double reporting (June 2020).

I’m with you; our accounts were impacted, we were frustrated.

But we moved on because its all part of the game we play with Facebook.

I appreciate someone in my group (including the below image, thanks Barry) raising this recently and we should talk about it – whilst it’s almost impossible to get Facebook to change their ways, it is entirely possible to help each other through issues like this. 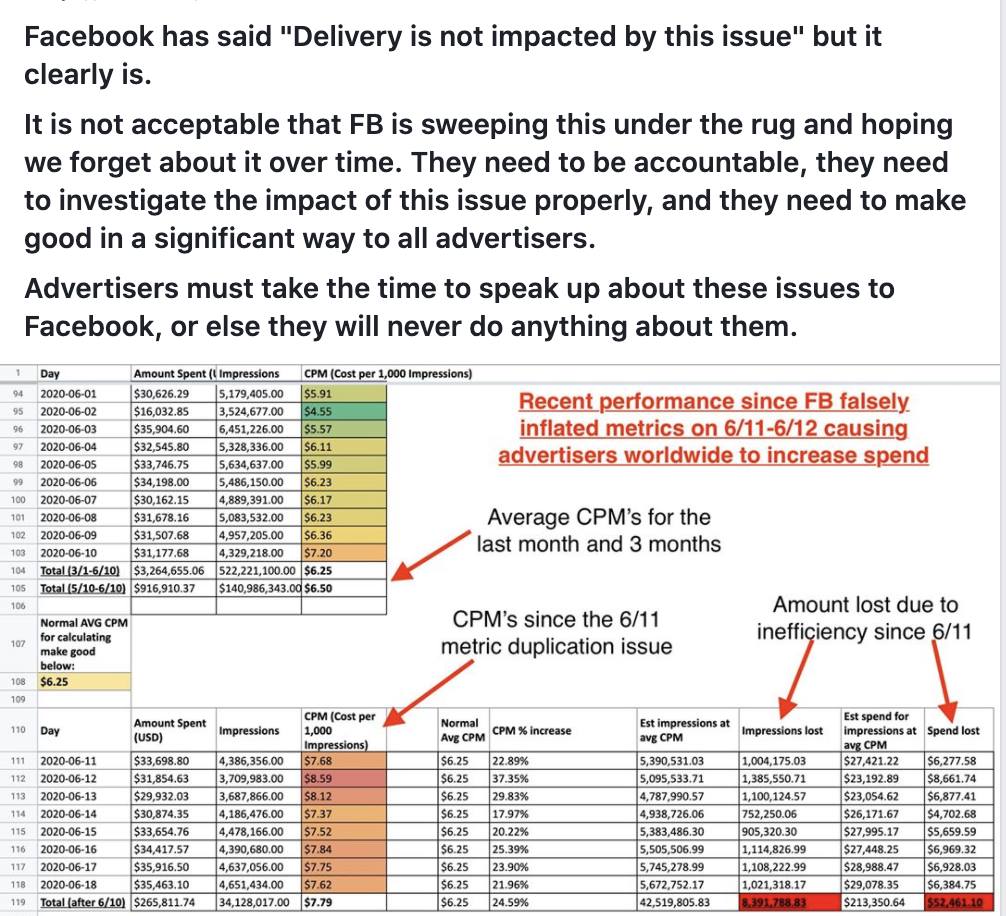 I can only go by my experience and personal advice on this. Take it as me trying to help you, whilst being in the same boat as you.

1. This is not ad fraud. It’s a coding error and a very bad one at that. Ad fraud would suggest they had intent to fool advertisers into spending more. I doubt Facebook would put themselves into this position for any reason.

2. It is however, an unacceptable response from Facebook. They messed up. It’s worth noting it was an Ads Manager bug, meaning that the reporting showed double conversions however the underlying data using in the auction was not using double conversions. Still their standard responses are poor.

3. My team noticed this fairly early on through internal processes. We report internally on accounts 2-3 times per day in a shared Slack channel. This is over and beyond general ad account tracking during the day for those responsible for those ad accounts, so we get a ‘portfolio snapshot’. This ensures at least one person is consciously checking ALL accounts, numbers and reporting them – including a colour coding system (Red, Amber, Green) on how performance for that account is today. Through this we noticed the very low CPA numbers however since we’re reporting ROAS too, the numbers didn’t add up. We took precautions and monitored it through the day.

4. We always thoroughly check and test automated rules before we step back from them. In cases like this, even if we didn’t spot it, using Revealbot we have alerts going into Slack every time RB does something and we ensure we check in on what’s going on. It’s irresponsible to not be checking rules (I know some were caught out by this).

5. We also saw an increase in CPMs after this. Personally I’ve seen this too many times, where Facebook make a mistake, the auction has a wobble, then returns to normal. It could have been people increasing budgets incorrectly or something else but in any case in most cases we rode it without changing too much (aside from a few budget decreases and paused ads). Accounts fully recovered within 2-3 days. This comes through experience and whilst it shouldn’t happen, if you’ve advertised on Facebook for more than a few years you should see this as normal behaviour by now, unfortunately.

6. You’re completely within your rights to be upset by this. We’ve seen many issues in the past where we’ve lost money on our own ad accounts, as well as client ones, due to Facebook tech issues. Each time we’ve asked for a refund we’ve gotten the same response; billing/delivery was unaffected. I work closer than many of you with Facebook yet I am left as frustrated as many of you.

7. Always use more than one reporting platform. We combine our usual ads reporting in Supermetrics by also pulling in Google Analytics data for accounts. This is partly to help with attribution and partly to ensure we’re not seeing data errors. I recall a decade ago seeing my site stats drop to zero and spending hours figuring out what was wrong with my site, only to find out it was the actual reporting software itself that stopped collecting data due to a bug their side. Software of any kind is prone to human-led error.

8. Facebook is the landlord and Facebook make ALL the rules. You either accept this or you move on. Making any kind of dent in terms of stopping ad spend to protest would require getting the billion dollar corporates to support you. They won’t. Of the 14,000+ advertisers in this group I’d be pretty sure if everyone here simply stopped spending on ads Facebook would barely notice. It’s the reality of the platform. Do I like this? No. If I could find an ad platform as powerful, high converting and consistently performing as Facebook I would consider switching over. It is frustrating when things like this happen but I choose to expect it, accept it and deal with it, because the upside is far higher than not using Facebook ads.

Anything you’d want to add?