Note: the PDF version of this guide is available further down.

In 2017 Facebook announced Campaign Budget Optimization (CBO) as a new option for managing budgets. In 2019 they announced it would become mandatory and in 2020, well, it’s here to take over.

I transitioned to fully CBO early 2019, before Facebook made the announcement, because the results were both more stable and consistent.

This meant my team and I could focus more on marketing our products and services and therefore spend more more doing the things that actually bring about lower costs and higher returns.

If this sounds like a silver bullet, it’s not. I wrote a whole step by step training program on getting the best out of CBO and it takes more than simply setting budgets at campaign level.

This guide right here is intended to support those yet to transition fully to CBO to follow my advice on how we tackle this challenge with clients (because ALL of our own ad accounts are fully CBO, by choice). I am assuming you understand Facebook marketing and have run ads in order to understand this guide.

CBO allows you to set budgets at campaign level, as opposed to ad set level.

But it goes way beyond that with an algorithm that thrives on data and simply makes better and faster decisions overall than you and I.

CBO holds history and learnings at the campaign level.

CBO makes daily decisions based on the auction, which we can’t see.

CBO likes recent data, and lots of it.

You need a good product, to have good targeting, good ads and a good sales funnel.

Sounds simple but many are still overlooking this most basic requirement.

How do you make that transition to CBO? Let’s jump right in.

Details from Facebook are either very good or very bad.  There’s no consistency. But with CBO, despite lots of early information and advice, in the last 6-12 months it has all gone quiet.

I’ve tried to lead the way but with only a tiny percentage of the 7 million advertisers that I can reach (and the few thousand students that have taken my CBO Test, Optimise, Scale training program) I am yet to reach a decent number that need this.

You’re here and I hope this guide gives you the next stage in developing better consistency and performance in your campaigns.

Here’s what we know so far about the transition phase:

a) Some ad accounts are already CBO only – I own a few of these. That means that there is no option at the ad set level to set budgets and when creating a campaign, you are forced to enter a budget. I’m 100% ok with this as I love CBO and it had no impact when this happened, back in September 2019 when the first roll outs occurred.

b) The rule in place for September 2019 seemed to be that ad accounts that ran majority of campaigns with CBO 56 days prior to September would be transitioned.

c) Those that weren’t were on hold until February 2020 which was the official next wave of CBO rollout (which at time of writing, is where we’re at).

d) The message from my rep I recently received is below. I’ll explain some of the transition points further down:

With this change, we’ll be moving budget settings to the campaign level, rather than at the ad set level. This feature allows our system to automatically and continuously distribute the campaign’s budget in real-time to your top performing ad sets.

Here’s what you need to know about your account’s migration to campaign budgets:

> New campaigns must use campaign budgets.
> You won’t have the option to switch to ad set budgets when creating new campaigns.
> Edits to existing campaigns with ad set budgets will be limited. You can’t add new ad sets or extend how long they’re scheduled to run, but you can unpause existing ad sets and increase their budgets.

This update is part of an ongoing effort to help you efficiently manage and maximize value from your campaigns. Overall, we have seen advertisers using campaign budget optimization benefit from lower costs per results for their campaigns, while freeing up time to plan future campaigns and focus on other areas of their business.

e) the next wave of rollout occurs 27th February, so mark the date and be ready

f) If you have not yet received the notification in ads manager, then you’re either in the next wave or are already 100% CBO.

i) An entire batch of Facebook marketers will grow up only ever knowing CBO. Makes you feel old hey? Wait until you talk about ‘in my day we set budgets at ad set level…’ – I digress.

j) If your account has not yet been transitioned, in summary, Facebook will place a penalty on your ABOs. For example a campaign with ABOs is not allowed to have new ad sets added. So whilst you can still unpause existing ad sets and increase budgets they’ll be limited other things.

k) If you use an API (i.e. like 3rd party software that manages  ads) then the CBO migration kicks in much later in 2020

So now you understand the transition, let’s talk about your actual transition.

Let’s get this question answered first: “Can I simply create one ad set per campaign and mimic the ad set budget setup by creating lots of new campaigns?”.

You can but you shouldn’t. The CBO algorithm is expecting more ad sets in order to create better decisions.

We ran the same with a CBO campaign but to prove this worked, we simply copied the same ad set including the ads, into the campaign 3 times.

The results are below. 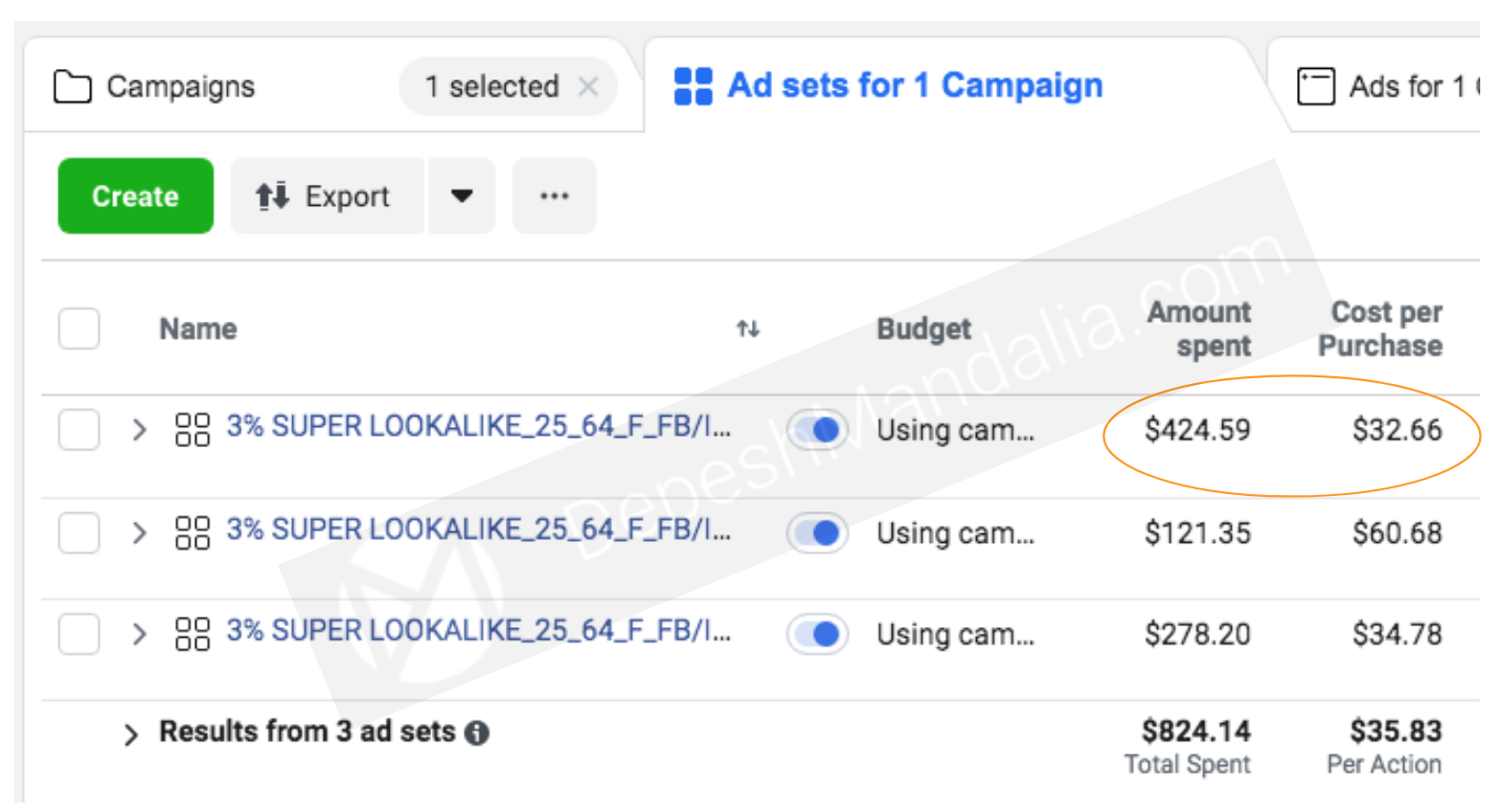 What’s interesting is that Facebook actually did what they said it would do and moved budgets to the better performing ad set.

In both cases we didn’t edit anything and over time the average $35 CPA would continue to drop as Facebook chases cheaper conversions.

Few pointers on the transition:

You have a good or great ad account right now and you don’t want to mess this up by even thinking about CBO. Well, at some point you’ll have no choice so why not start now?

I created what I call ‘The Advertising Core-4″  (AC-4) as a way of identifying the 4 main things that make any advertising platform tick:

If your ad account is performing well (which is not just the business KPIs like ROAS, CPA, CPR) but I’m talking also about monthly page satisfaction score and ad level engagement then you’ve probably got all 4 of those in a strong position.

For you then, moving to CBO is going to be way easier. Here’s what you need to know:

a) There is a chance your current strategy WON’T work. Especially for those that create multiple small spend ad sets, like 50-100+ and use rules and hacks to try generate sales and scale. Facebook, I believe, keep an eye on hacks and tweak the system to make them less effective. There are certain strategies like this that don’t work as well with CBO so keep this in mind. Oh the solution? Focus more on a great product that people want, really get to understand who your customer is and their pain-points, build offers (propositions) that bring them into your funnel and convert them. That’s as simple as The AC-4 really is. Don’t over complicate things.

c) I would focus on the low-risk option depending on how much time you have left to transition.

Let’s get straight to the point on this. If you ad account, campaigns and ad sets are not performing well right now then moving to CBO is not going to magically fix performance.

Your goal is to go back into testing to find ads and audiences that work together. Whilst that’s out of scope for this it does make it easier to transition, since you’re not going to make things worse than they already are – I mean that in a good way, that you can transition and learn CBO faster!

For you I would recommend:

a) work harder on testing, which should happen regardless of using ABO or CBO

b) Start testing in CBO – set a campaign budget which is your test budget for each ad set grouped into a single budget.

c) Use the more aggressive switch over to CBO below.

With the hard CBO transition, you simply create duplicates of your ABO campaigns and set them as CBO’s reusing the same budgets, the same ad sets and ads that were already live.

Note: the original ABO will need to be paused in order to prevent overlap, thus it increases the risk of a performance drop whilst you move to CBO.

I only recommend doing this if your ABO campaign has been performing well consistently and you found your winning audiences and creatives already and have confidence in what you’re doing (because you’ve already studied CBO like The Ultimate CBO Cookbook!)

We applied this method on one of the lead generation ad accounts:

The goal of this transition is to create a duplicate campaign similar to the hard transition path with all the same settings, however, you would run it alongside the ABO campaign to maintain your ABO performance (assuming it’s already performing well) until your new CBO campaign is performing as well as ABO.

Eventually, you should aim to turn off your original ABO campaign which would likely result in further improvements since you are removing the overlap which is why this path is medium risk. But it’s also marked as potentially low risk because you’re trying to allow both ABO and CBO to run whilst you transition and build up performance for your new CBO campaigns.

In the example below we ran ABO and CBO for retargeting side by side with similar budgets and let them play out. We saw overall that the CPA on CBO over time performed much better. We couldn’t rule out that some users saw an ad in the ABO and then saw and converted from an ad in CBO but by this point our new CBO campaign was getting consistent results so we could switch the ABO campaign off and maintain good performance.

With this method, you would follow guidelines from CBO Cookbook training to create your new CBO campaign structures & apply our best practices to increase your chances of success.

This would mean properly planning a new CBO structure and following our step by step process on testing, phasing in audiences and ads that worked, and systemising your prospecting stage before you’re ready to scale.

Even though our methods from the CBO Cookbook training are proven to be working (hence making this low risk in terms of setup), your performance still highly depends on your overall business (and specifically AC-4) thus it makes it a medium risk method too.

Part 8: When CBO Is Your Only Option

If you’re now at the stage where your ad account is CBO only, then really you’re only left with Part 5 or Part 7 above as your viable options.

Here’s the PDF version of this guide which you can print and make notes on.

This guide should give some guidance and confidence on the potential paths to take. Transitioning needs to be right for you and your business to ensure you’re prepared and learning how CBO works and that you’ve moved over to CBO before Facebook forces you.

It still requires testing and adapting on your part. There is no simple switch to make CBO magically work. But when used well, CBO will pay you back nicely.

The Ultimate CBO Cookbook is the closest you’ll get to a silver bullet – the success stories are WILD. Literally step by step instructions on making CBO work used by advertisers spending $50 per day through to $25k per day.