Media love to kick a giant down. No bigger than Facebook when it comes to advertising.

Reports have suggested opt-in rates of 10-12% following the rollout of ATT (Apple’s ad-tracking prompt released on iOS14.5 on 26th April).

Others are saying iOS14.5 and ATT have ruined their ad account performance (tip: you ain’t seen the worst of it yet; read on).

This report from a friend and authority on app install campaigns (CEO of London based Appsumer) is one of the best reports I’ve read since the iOS14.5 rollout. I’ve pulled out details, here is the link to full article and here’s some additional data/info. 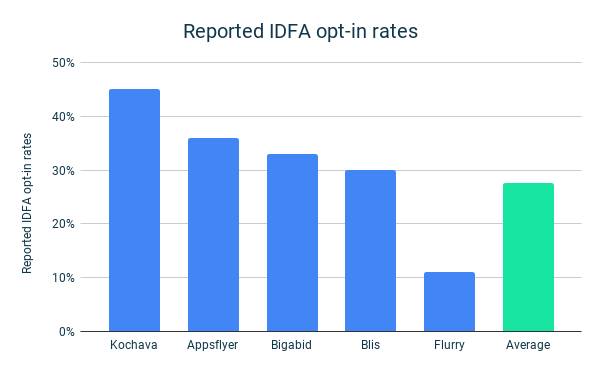 In addition I found these stats interesting too:

Notice how ‘Shopping’ is 43%? Ecommerce anyone?

Consider the above when you generalise the impact on your ad campaigns.

It’s the easy way out.

DO learn how to run ads properly, adapt to the changes in ads manager and focus on great offers, content and funnels.

If anything this will simplify advertising due to the lack of breakdown data in ads manager and greater focus on top-line growth and profitability.

If you want help you know where me and my team are – we have the best Facebook ads operating system on the planet (The BPM Method) and it is still producing results for those that trust and follow the process. Reach out to us here and we’ll talk you through how The BPM Method has allowed thousands of advertisers already to continue seeing great results without worrying about the technical issues happening with the platform.